Brilliant again. MOTM by a country mile for me. 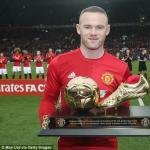 Immense again  and the shining the light today again. The improvement in him the past few months has been nothing short of sensational from laughing stock in the media and some fans to a key player. F

Absolutely. His improvement is startling. Confidence looks thorough the roof at the minute too. Looks to be decent value for £50 million if he can keep this level up. Genuinely, him, McTominay and a t